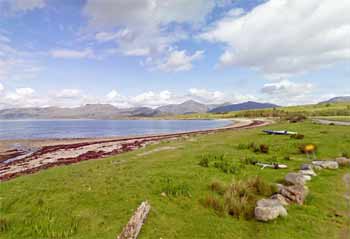 Travel directions: From Glasgow follow A82 up to Ballachulish. Turn right at the roundabout before the bridge taking the A826 through Kentallen and Duror. Take a right out of Duror over a small bridge signposted for Cuil Bay and the Tigh Bahn B&B.   Google

Parking directions: When the road meets the edge of the bay there is a small bridge followed by 2 laybys. We chose the 2nd layby as it was slightly further from the stream mouth and had a shorter beach walk.   Google

Site entry/exit: Over the beach and basically straight in – obviously this a return to entrance point roughly otherwise it's a long walk around the bay back to the car.

Underwater directions: Headed due West with the island in sight for a minute to get the water deep enough. 3 mins later and we reach the steep slope from 5m down to 16m and a more modest slope down to 25m. Followed the contours in a northerly direction and returned slightly shallower heading south and then east.

Site Hazards: A sheltered bay from tides and currents. No harbour or moorings nearby but usual diver caution should be observed. Seabed quite silty with lots of dead leaves and branches.

Suggested experience: Sport diver – not really a novice dive due to the amount of silt and mud that can be disturbed.

Dive Report:  Dived: 27/11/10  A harsh frost with -6 degrees with a flat calm sea looking very picturesque. The shallows were sand and pebbly lots of usual crab and starfish life. The slopes were silty and dead leaves mostly – slender sea pens were found at approx 18m in quite a few clusters. Angular crabs, gobies, baby scorpion fish and nudibranchs - Favorinus blianus were in plentiful supply. Viz was a respectable 5m