The falls of lora 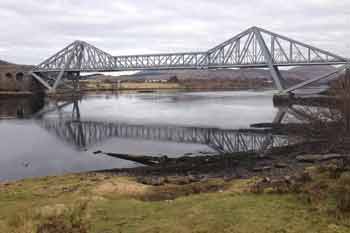 Type of Dive: The falls of lora on Loch Etive can be a rollercoaster drift dive if you get the tides wrong.

Travel directions:  Follow the A82 to Crianlarich, then take the A85 to Oban. Before you get to Oban, you’ll arrive at Connel on the south bank of Loch Etive. Stop here for Skerries Bridge and the Falls of Lora.

Parking directions: There is a carpark to the south-east of the bridge, where the above picture was taken from.

Tides: Tide tables  Tidetimes Its best to do this dive as near to slack water as possible on a flooding tide.

Site entry/exit:  It’s possible to do this dive from the shore, but boat cover can save a long walk back from the other bank if you get the tides wrong. Utube 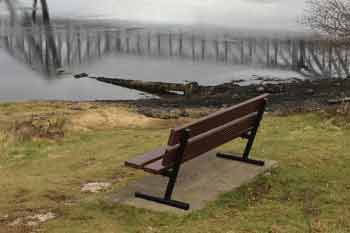 Underwater directions:  Entering Loch Etive from the south bank next to Skerries Bridge, swim out into the flow and then descend to about seven metres. Keep working your way into the tide or you can easily end up in an eddy that will simply deposit you at the side of the loch. You will see various bits of debris on the seabed from the building of Skerries Bridge. This is where your speed picks suddenly, you go over a drop-off and you’ll really begin to fly. You’ll be pulled down to about 30m (despite the figure on the Admiralty chart, which states only 20m). Watch out for the eddies at the base of the wall, which are caused by the uneven seabed. They can hold you there, so swim hard away from the wall and you'll pick up the main current again. There are lots of gully's that can separate you from your buddy so try and stay together but plan on being separated. If you can get a RHIB it's the safest way to dive here, as the RHIB can pick you up from where you get deposited after the dive. This is also one of the most colourful dives you can do in Scotland. 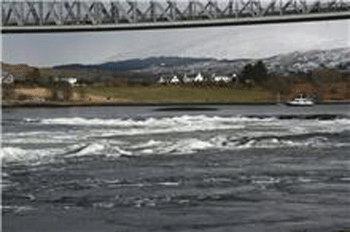 Thanks To: Charlie for the photo

Other comments: Not for the faint-hearted More Info Oban coast guard. 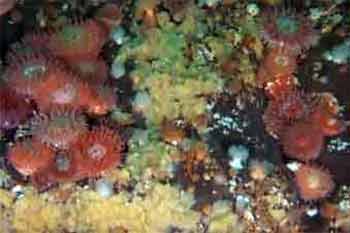 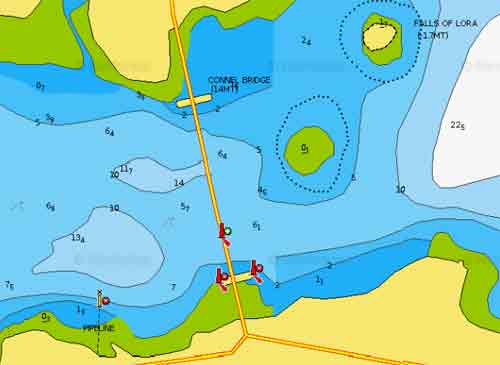 Dive Report: John Nicolson  I have only dived the falls once and once was enough. It's a scary dive, when you are flying down a gully that's covered in barnacle's and it bears off to one side you think you will hit the side but the water pressure keeps you in the middle of the gully. If that was all it would just be scary but you have the depth to contend with as well, its a real roller coaster of a dive. Felt like I used most of my 12L putting air into my stabi and letting it out. I was using my stabi as you cant get air out you suit fast enough. After the dive, everybody said it was great but I think they were just happy to have made it.

Dive Report:   Keith Waugh 31/12/10  I have dived the Falls 4 times this is one of the dive reports. We entered the water on the south side and immediately felt a slight current, but down we went into a beautiful gully. The visibility was good at 9metres and the sides of the gully were covered with short seaweed, Dictyota dichatoma, I think. There were also sponges of different colours, small sea anemones, small mussels and long kelp fronds. From time to time we could see the flood current whipping along above us. The kelp was horizontal. We came across large mounds of gravel at each end of the channel within the gully with slight currents over them. We also found a few pieces of wreckage and an object like a shell case. Our bubbles ascended in all directions, the kelp went berserk around us as small whirlpools tugged at it. Towards the end of the dive, we were trapped by the now, much stronger currents over the gravel mounds. There was nothing for it but to surface in mid-channel. As we came out of the gully to surface we were buffeted by the strong currents and had to hold on to our masks and each other. On hitting the surface we immediately blew our BCD's to full capacity then still holding each other, swam across current to the south shore. We went under the bridge quite smartly but I managed to get a foothold on the rocks and swung Marilyn round so that she could gain a foothold. Finally, we clambered out of the water into the grounds of a church!!!.

Dive Report:  Woz 21/6/11   Just screamed through the Falls of Lora. Holy bananas what a mental dive! Up, down, spun around like a top, sucked down to 30m into a cave, spat out into a circular dip that needed half a wing of buoyancy to pull me out of, fired into gullies and cliffs then finally shot me along the bottom where I banged a CO2 blob up and cried for my mother. Thoroughly recommended   Utube